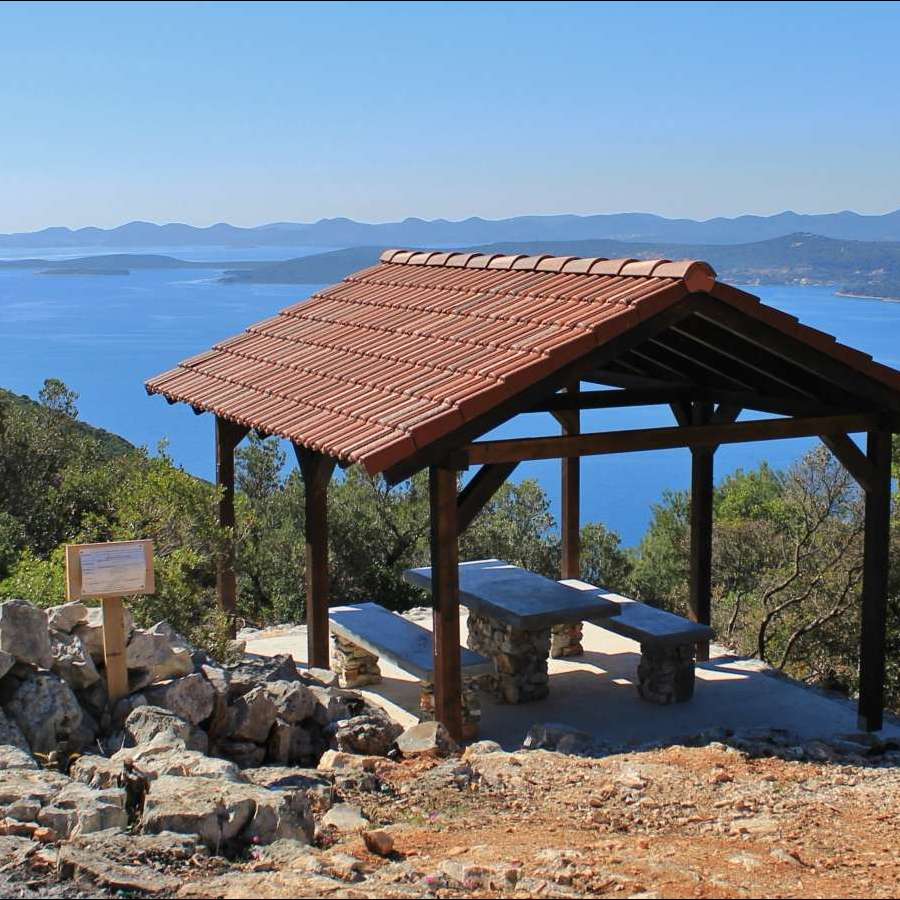 This is a project within which olive and cycling paths were set up and mapped, rest areas and lookouts were built in the most attractive areas in the hinterland of the island. The project is also accompanied by a new cycling map and a mobile app. Now there are more than 100 kilometres of cycling and hiking paths on the island with different themes and two trail paths. These are some of the rest areas and lookouts with their themes:

The island Ugljan is an island of monoculture of olives and olive groves. There are an estimated 700.000 olive trees on the island.

Today’s olive groves, which have been positioned in ancient Roman parcels for two millennia, can be called the olive groves of Emperor Claudius.

The watering place Black Tear is a natural pit in which rainwater is collected and used by locals for providing water for livestock, watering vines and olive groves, and other agricultural crops. The watering place was used by birds and animals. Around the watering place there are still visible boundaries of arable areas marked with stones by their owners.

The pond was named Black Tear due to the specific black colour resulting from holm oak leaves, while in the neighbouring Lukoran, the pond Cezunj was named Blue Tear because at certain times of the day, due to the reflection of the sun, it takes on an attractive sky-blue colour.

The pond Cezunj was once a natural watering place for animals, while farmers would rest here on their way back from the field. At certain times of the day the pond takes on an attractive sky-blue colour and that is why it was named Blue Tear. In the nearby Čeprljanda, the pond Jama was named Black Tear due to the specific black colour resulting from holm oak leaves.

Many medicinal and aromatic herbs are growing on the island Ugljan, and most of them are wild and healing.

Apart from vegetation, the island Ugljan is also known for its many animal species, and it is important to emphasize that no poisonous snake has ever been found on the island.

In the past Koludriško was a natural watering place for animals, while farmers would rest here on their way back from the field. All natural spots on the island where rainwater was naturally collected were of great importance, especially for donkeys owned by almost every family. Donkeys are animals carrying on their back almost the entire cargo from the island's olive groves, vineyards and vegetable gardens. They were also used to transfer wood to people’s homes, where many families warmed up in the winter. Before the introduction of electricity, the life of the islanders was certainly much more natural, social and in great synergy with nature and animals.

This was once the path which the spring procession of inhabitants of Preko, Poljana and Sutomišćica passed on their way to the Church of St. Michael, praying for a good harvest on the fields which was essential for survival.

The first and oldest written document about a cave in Croatia is a church document from 1096, handwritten in Latin, and it is a description of the boundary of the estate of the Monastery of St. Chrysogonus from Zadar on the island Ugljan.

That "place" is actually a cave located in the north, above the bay Zeljina. It is 28 meters long, on the western side of the island Ugljan at approximately 100 meters above sea level. The academician Mirko Malez explored and described the cave in 1952.

A document from 1096 proves that people were well familiar with our caves 900 years ago and that, as is the case on the island Ugljan, they were used as landmarks to mark the boundaries of estates.

The cave is still preserved in its original form and is a real adventurous challenge. A mapped path leads to it, starting from the parking lot below the Fortress of St. Michael. It is a 20 minutes’ walk in a beautiful natural environment.

The rest area Gorina is positioned on this location where farmers would rest on their way back from the field. This was once the path the spring procession of inhabitants of Poljana passed on their way to the Church of St. Michael, where they prayed for a good harvest on the fields.

In the field at the foot of St. Michael there are dozens of bunja (stone houses built of untreated stone, in dry-stone technique). Some of them are hidden from the eyes of the public, covered with macchia, on impassable paths. Most bunjas in this area were built at the time when the wine industry was booming, in the late 19th and early 20th century, and were used for storing tools and as a shelter from bad weather. Stone houses have always been a sign of family pride, just like the neat vines and maintained olives. Most often they were built by the landowners, unless, exceptionally, if they were demanding, by more experienced builders, but such bunjas are in the minority.

The Liburnians were the first inhabitants of the island Ugljan.

They were engaged in agriculture, livestock and fishing. All ancient texts mentioning the Liburnians describe them as esteemed traditional seafarers and shipbuilders.

In the 4th century BC, they built a settlement on Čelinjak Hill and fortified it. The rampart with the size of 87x25x50 meters was built of uneven and untreated stones, in dry-stone technique. They lived in that fortified space in the event of an enemy threat. Čelinjak offers a view of the Zadar canal, the canal between the islands Ugljan and Dugi otok, and the Veliki Ždrelac canal as well as of the neighbouring islands Rivanj and Sestrunj. The inhabitants of Čelinjak could control the traffic through the Veliki Ždrelac canal and see if the enemy was approaching.

They lived in small, square-shaped houses measuring 4x4 meters and 3x4 meters, built in drywall technique such as today's bunjas.

The rampart and several square-shaped Liburnian houses were preserved until today.

Another place on the island Ugljan ideal for taking a break and photographing! To make all your friends turn green with envy and follow you immediately.

Although the sunrise on the island Ugljan was praised already in 1844, in the verses of the most famous poet of Croatian Romanticism, Petar Preradović, only when you cross to the west side of the island and see the sunset - you will be left speechless.

Sunsets can be spectacular in any landscape, and one of the most famous is the one at the waterfront of Zadar, which was especially praised by the legendary film director Alfred Hitchcock. However, when the sun goes down into the sea, disappearing in the outlines of numerous islands on the horizon, you know that this is the moment you dreamed of. That this is the postcard of your life, a memory you want to keep forever. Your personal magical moment, because, remember, there are no two identical sunsets!

So, stop for a moment and connect with nature! Here, on the island Ugljan, between Lukoran and Ugljan…

In the past, Završje or Počivalište was a rest area where tired farmers would take a break (rest) when returning home from the field. The stories and legends of this region were exchanged at this place. If we would go back only 60 years in the past, we would be looking at the scene of the Zadar Canal with numerous sails of gajeta, leut, kaić, bracera and trabakul boats. Farmers who stopped here after returning from olive groves, in a few days would leave by boats to cultivate their overseas land in the vicinity of Zadar. They exchanged oil for other goods and valuables, and went to work for Zadar nobleman and gentleman families. The rest area offers a magnificent view of the island Ošljak, with a shape reminiscent of Napoleon's hat and, as such, this rest area is the perfect spot to take a selfie and boast about it before your friends!

The hill Željina (219 m) is positioned southwest from the Fortress of St. Michael (263 m), and its foothills are covered with a series of cliffs. The highest point of cliff Željina reaches 59 meters and there are more than 30 climbing routes set up on the same. It is attractive and interesting for climbers because it is open all year round, unlike most other cliffs. Autumn, winter and spring are perfect seasons for climbing on Željina due to the mild temperatures, the sunny position and only a few rainy days.

Speleological researches have a long history in Croatia. It is interesting that the first written information about a Croatian cave dates from 1096 - a church file in Latin language mentioning the Željina cave on the island Ugljan. It is 28 meters long, positioned approximately 100 meters above sea level, 500 meters north of Željina bay. The academician Mirko Malez explored and described the cave in 1952.

The bay Svitla is located below the hill Vela straža. In the past it was a safe haven for locals of the island Iž who travelled to Zadar through Preko. The bay was named after the custom of lighting lights, signalizing to the neighbouring island Iž that someone is waiting for a return transport to the island. To summon the residents of Mali Iž, the fire would be ignited on the southern cape of bay Svitla, and to summon the inhabitants of Mali Iž, the fire would be ignited on the northern cape. This way of connecting Iž to the mainland through the island Ugljan existed until the establishment of ferry and shipping lines. Due to the high exposure to the sun and shelter from bora wind, Svitla is a popular place for those who are sunbathing and swimming in early spring, or in late autumn.

According to legend, in the cave above the bay lived the modest and pious hermit Boško, who was ceremoniously buried in the Church of St. Lawrence in Lukoran because of his particular way of life.

In the village Ugljan, in the hamlet of Muline, you will find the remains of an ancient oil mill from the 1st century, the evidence of two millennia of olive-growing and olive oil production on the island. At this site, olive oil and wine production in the five strongest olive presses in the Mediterranean are has been scientifically researched and elaborated.

The Muline press, which replaced the so-called Katon press, was applied for the first time in history in Muline. The oil mill operated until the 4th century. The process of storing olives in the sea until processing was applied. This process kept the olives from rotting and decaying before processing. The new olive oil, which tasted better than the usual one, was well accepted on the market and became the most valued oil of the Roman Empire under the name Oleum Liburnicum, and it was described by the Roman writer Apicius in the 4th century. Other manufacturers had the recipe for its adulteration because they did not know why it was different from all other oils.