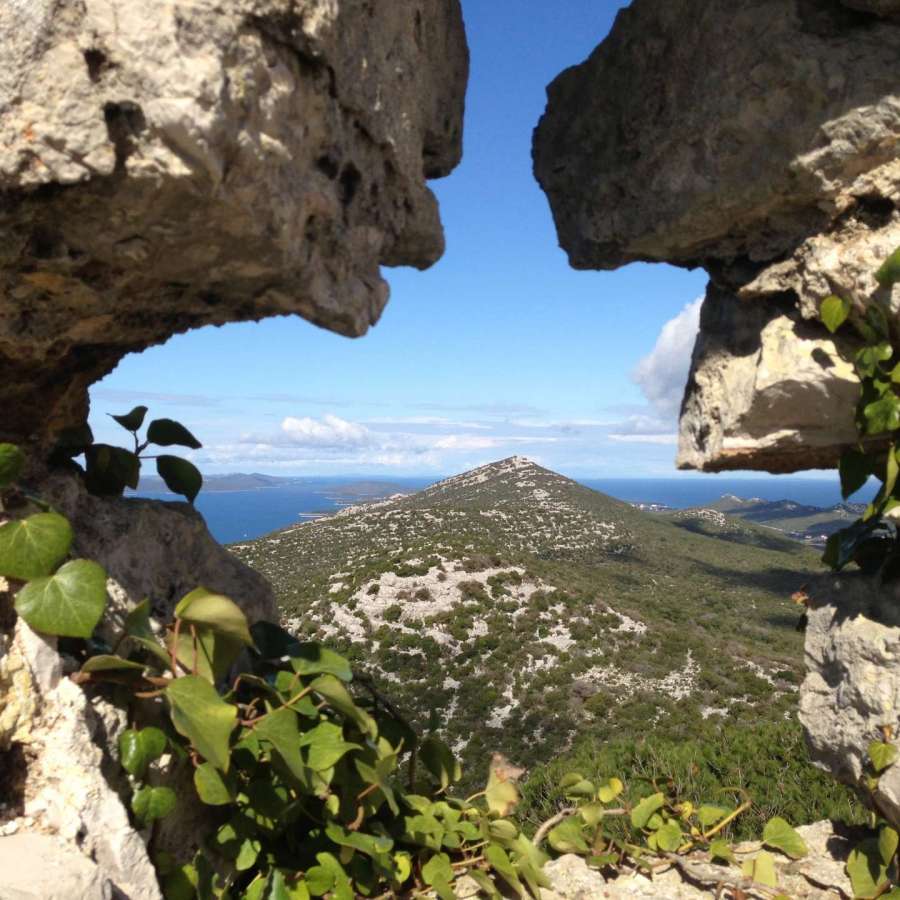 On the hill of St Michael in Preko on the island of Ugljan, there are remains of the medieval fortress of the same name, which played a very important role throughout history, especially during the Venetian siege of Zadar in 1345 and 1346. Due to its location that was hard to reach, it was suitable as a reconnaissance and it contributed a lot to the defense of the city from the sea. The fortress was mentioned for the first time in the middle of the 14th century but it was probably built on the foundations of an older fort from the 6th century. The fortress once housed the Benedictine monastery of St Michael with the church of the same name. In the past, the locals of Preko and other places on the island on the occasion of the feast of St. Michael the Archangel made a pilgrimage to the church of St Michael where St. Mass (the church was demolished in World War II), and the hill of St Michael is still a favorite picnic spot of many locals and domestic and foreign visitors.

To the fortress of Sv Michael has a 3 km long asphalt road suitable for cars, bicycles or pedestrians. The fortress is special for its view of more than 200 islands of the Zadar archipelago and the Kornati National Park. On the southwest side, there is the Željina hill, where more than 30 climbing routes have been set up. Željina is open all year round, and autumn, winter and spring are the perfect seasons for climbing due to mild temperatures and slightly rainy days.

The Church of St. John the Baptist, built in stone at the end of the 11th century is located on the ferry dock in Preko. The first mention of the church of St. John the Baptist dates from 1 March 1377, when its chaplain Grgur is mentioned. It is preserved in its original form, with plenty of stone church furniture, it has been explored and restored. It is the most valuable example of early Romanesque architecture.

OLD CHURCH OF OUR LADY OF ROSARY

The old parish church was built in 1765 on the site of the older church in the local cemetery. It was sanctified on 24 January 1774. It is a single-nave building with a sacristy and three marble altars. The main altar with the tabernacle and the altarpiece of Our Lady of the Rosary, with St. Dominic and St. Clare: side altars: right altar of the Holly Cross with an altarpiece: the Crucified, Our Lady, John the Apostle and Mary Magdalena; left altar of the Souls of Purgatory with an altarpiece of Mila Wood; in the niches at the bottom of the church are wooden statues of the Sacred Heart of Jesus and Our Lady of Health; holy water stoup built in stone. The bell tower with four bells was built in 1844. The altarpiece Souls of Purgatory of the family Salghetti-Driolli has been restored and is now in the parish church.

NEW CHURCH OF OUR LADY OF ROSARY

Three-nave church, built in 1965 in accordance with the design of Mladen Fučić, sanctified in 1967. Mosaic in the sanctuary, stone altar facing the people and grand bronze crucifix made by the sculptor Joseph Poljan. Bishop Josip Marčelić is buried in the church. In 2010 the new altar as part of the restored sanctuary was consecrated by the Archbishop of Zadar Želimir Puljić.

In the 19th and the beginning of the 20th century, many local women from Preko made a living for their families by doing laundry for the noble families of Zadar.

The tragic life of the laundrywomen from Preko is testified by the tragic death of 16 laundrywomen who died on November 2, 1891 in a shipwreck while transporting clean laundry to Zadar, ready to be delivered to its owners. On Mondays the laundrywomen would pick up the laundry in Zadar and on Saturdays they would return the clean and ironed clothes to the owners in traditional boats - fishing boats with sails or oars. The laundry was washed in wooden buckets with the help of ash and homemade soap. After being washed in buckets, the laundry was taken to the seashore to a wellspring where it was rinsed.

Not far from the islet of Galevac (Školjić), under the hurricane-force wind scirocco (jugo) the ship leaned, capsized and sank to a depth of three meters. Out of 31 passengers, the ones who lost their lives were the laundrywomen who were in the interior of the ship, under the hatch cover which protected them and the laundry from bad weather. The oldest laundrywoman was 75 years old and the youngest was 14, and among the dead laundrywomen there were two pregnant women. This tragic event greatly marked the further history of Preko. In honour of all the laundrywomen and women from Preko, a sculptor from Preko, Anselmo Dorkin, made a memorial sculpture called ''Our Mother'' on the site of the wellspring where the laundrywomen washed laundry for years.

The Romanesque Church of St. Peter was first mentioned in 1297, and it was a part of the Monastery of St. Michael.

Church of the Queen of Peace

The church dedicated to Mary Queen of Peace was built by the parish priest Šime Sturnela who donated it to his birthplace. The church was sanctified on 22 August 1999 on the feast of Queenship of the Blessed Virgin Mary.

The Church of St. Gregory is first mentioned on 10 January 1398, and the cape on which the church is located was named after it, and it is a part of the estate of the Zadar nobleman Lombardin de Soppe.

The Parish Church of Saint Euphemia is mentioned in 1349, while the new church is mentioned in 1679. The Venetian Late Baroque painter Giovanni Battista Augusta Pitteri, who lived and worked in Zadar for a long time, painted the medallions with scenes of the Mystery of the Holy Rosary for the Church of Saint Euphemia. The medallions are kept in the parish church and they are a Cultural Good of the Republic of Croatia. The altar picture of the Assumption of the Blessed Virgin Mary with St. John the Baptist, St. Michael and St. Euphemia of the Venetian Baroque painter Bartolomeo Litterini on the main altar is a Cultural Good of the Republic of Croatia.

The Baroque summer residence Lantana of Marko Antun Lantana noble family from Zadar, dating from the 17th century is a wonderful example of Venetian urban architecture. The summer residence has a rich political history. The ceremony of handing over the duty of the Venetian dodge for Dalmatia and Albania was organized in it until the fall of Venice in 1797. Countess Lantana lived in the summer residence until 1945, and after she went to Italy she left the castle to her housekeepers.

The Romanesque Church of St. Lawrence is mentioned for the first time in 1075/76, but also in the Bull of Pope Celestin III from 1195. Lukoran is the birthplace of friar Šimun Klimantović (around 1460-1520), writer, Glagolitic priest. His Glagolitic collections are famous, two are kept in the Russian National Library in Saint Petersburg and one in Zagreb in Ksaver.

The baroque summer residence De Ponte of the Zadar noble family De Ponte in Mali Lukoran has been preserved in its original form. The Croatian poet Peter Preradović, at that time an Austrian officer in Zadar, courted the beautiful countess Paola De Ponte, and on that occasion he composed the famous Croatian patriotic poem “Dawn is Breaking, Day will Come” (“Zora puca, bit će dana”) in the park behind the summer residence. In the park is the pine under which Preradović sat while writing the Croatian patriotic poem.

The Church of St. Paul the First Hermit in Galevac was built before the Monastery of St. Paul the First Hermit, and the Order of Saint Paul the First Hermit abided in the same until they moved to Hungary at the end of the 14th century. On 4 December 1443 the Archbishop of Zadar Lovro Venier handed over the Monastery with the Church of Saint Paul to the Third Order Regular of St. Francis. In 1912 the stone cave of Our Lady of Lourdes with a statue of Virgin Mary of Massabielle was built in the courtyard of the Monastery. In the memorial park there is a replica of the stone sanctuary in Lourdes. On the coast of Galevac, in 1900, a monument was erected to the washerwomen who lost their lives on their way to Zadar, drowning in 1891 near the island. The Monastery has a rich collection of Glagolitic scripts, and there is also the ritual of friar Šimun Klimantović from 1492 “Regula pokornih bratje i sestar ot kajanja tretoga reda blaženoga Franciska, ku potvrdi Mikula papa četvrti”.

There are two memorial sites on the islet with busts of Dalmatia's historical figures and an 18th century monumental cemetery.

The Church of Saint Helen is located on the lookout above the Old Village in the interior of the island.

Church of Saint Peter and Paul

The parish Church of Saint Peter and Paul with a cemetery is located on a hill outside the village, and it was built in 1579. The church was restored and the bell tower was built in 1991

Church of Our Lady of Health